Our overall editorial goals are (a) to faithfully represent and share the bibliographical data that Stainforth cataloged in his manuscript, and (b) to make these data understandable to those not familiar with Stainforth’s abbreviations and cataloging style. This project is not a detailed study of the manuscript itself, thus we have not transcribed and encoded every mark or space in the manuscript. If you suspect we made an error in our transcription, please send us suggested corrections. We are grateful for your input.

We transcribed the manuscript one page at a time into a shared Google Sheet and, concurrently, lightly encoded our transcriptions according to our style guide. We preserved blank lines and blank pages. In order to represent the structure of the manuscript and its data in its original form, and to make it useful for scholars, we encoded our transcription in XML according to the Text Encoding Initiative (TEI) P5 Guidelines, version 3.0.0. We transcribed each line from left to right across the page, preserving Stainforth’s spelling, punctuation, style, abbreviations, spaces (though not the exact dimensions of the space), and other marks that pertain to the catalog’s content. For example, where Stainforth uses “Xtn” to indicate “Christian,” we transcribed the abbreviation as is. We separated entities where necessary by a single space. For accented letters and nonstandard characters, we use the actual character rather than a character entity reference, where possible; nonstandard characters, like checkmarks, are represented as HTML character entity references. All but a few of the pages have 24 lines. We assigned line 1 to be the first entry at the top of the page where the first ruled line appears. A few pages have 25 or even 26 entries with entry/line 1 appearing above the topmost ruled line.

[Note: CKEditor will not publish any elements I type in this textbox if enclosed in angle brackets, so I temporarily substitute { and } brackets for < and >. I am working on configuring the editor to allow me to write code in it with angle brackets that will display when published. Thanks for your patience with this!]

We indicate unclear content by surrounding it with the {del} tag (see tag set below) and identify illegible letters with the @ symbol. For instance, line 4 on page 339 is difficult to read and so was transcribed as “J3 P (L. E) Here a Little {unclear}@@@{/unclear} 2d Ed [1851]”. We employ a similar method for representing content missing due to page damage, such as in the entry “J12 Adams (S. F) 6 Hymns in the Boston Book of {damage}Hymxx{/damage}”.The xx stands for characters missing due to damage, and we indicate in a note what those missing characters are if we can find a verified source. Where content is underlined, crossed out, or added between lines, we encoded it with the appropriate tag.

Here is our initial editorial tag set. To see our full tag set, download the XML/TEI-encoded version of the catalog. 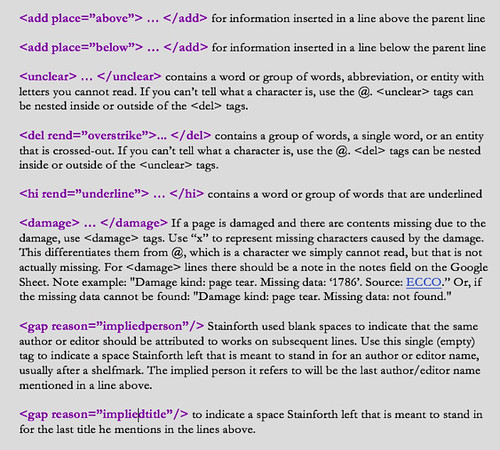 After we completed editing the transcriptions, we duplicated them and divided them into separate fields for shelfmark, author, title, publication place, publication date, and format. This is to say that the transcription data exists in two formats in our database: (1) as a replica of the data as it appears in Stainforth’s manuscript on each line, and (2) with that same data parsed into unique fields. To increase searchability, we edited some of the data after they had been parsed into multiple fields. We did not make any of these changes to the original transcriptions. In the parsed version of the data: