Mapping Stainforth’s Books: Where Are They Now? 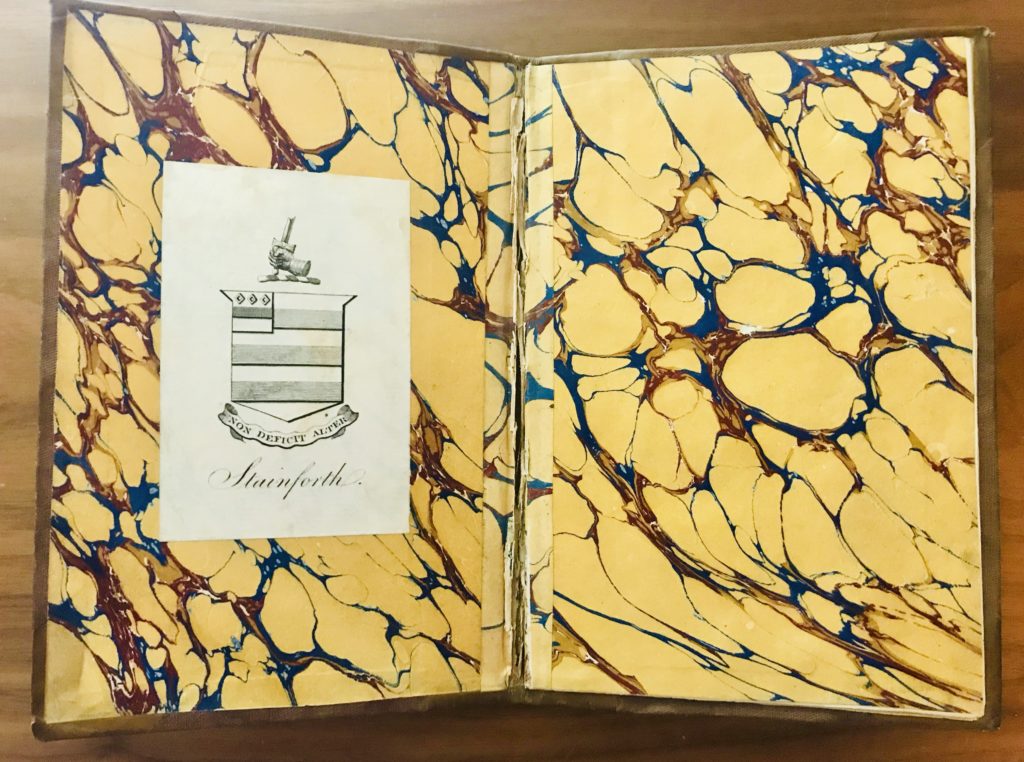 The Stainforth Mapping Project maps the locations of the books that we believe belonged to private library owner Francis Stainforth. We identify them by the distinctive Stainforth bookplate that he placed in his books. The map below displays the current locations of some of his books in libraries as well as the location of Stainforth’s former library in London in All Hallows Staining. Clicking on a library point on the map brings up a pop-up window that links to a list of ex-Stainforth books held at the library. If you believe you have a Stainforth book in your library, please fill out our form that will assist us in adding your book to our growing map.

Most, if not all, of Francis John Stainforth’s former books can be identified by his bookplate, which includes the Latin phrase “Non deficit alter” (loose translation: “not one fails,” but what does this mean for the copy?). 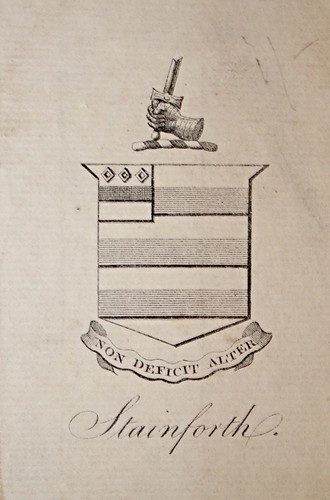 We infer that this bookplate belonged to Francis Stainforth because, thus far, every book we have located with this bookplate has an entry in Stainforth’s manuscript catalog and the 1867 Sotheby, Wilkinson & and Hodge auction catalog. The metadata for various libraries that list the bookplates have also, on occasion, listed the bookplate as belonging to Francis John Stainforth, and a 1988 article about the British Library’s acquisition of books from the auction also includes an image of the bookplate.[1]

To date, we have located ex-Stainforth books by searching library catalogs in the hopes that their metadata mentions Stainforth or his bookplate in their provenance metadata. We also harvest the data by contacting rare book and special collection libraries directly and by crowdsourcing Stainforth book sitings through our Google Form.

But why try and locate these books? The project’s effort traces how books have moved in the century and a half since the Stainforth library auction. That is, mapping the current location of ex-Stainforth books illustrates the movement of books from private collections and subscription libraries in the nineteenth century to the public and academic libraries we know today, which illuminates the changing nature and values of the library as an institution over time.

When possible the project will also trace a partial or complete path of some items from the 1867 auction to their current location through the utilization of provenance data and publically available information (old bookseller catalogs, auction catalogs, etc.). Such work will also illuminate the network of booksellers and dealers that existed both in Stainforth’s time and that still exists to this day as it is the means by which collectors and libraries acquire rare and hard-to-find materials. The auctioneer’s annotated sales catalog that currently resides in the British Library is a great asset for this work. For example, see this blog post by Michael Harris that traces the provenance of Aphra Behn’s A Pindarick Poem from the 1867 Sotheby’s auction to CU-Boulder rare book collection.

The mapping project hopes to locate as many ex-Stainforth library books as possible, and you can see the current state of our efforts in the map above. We made this map using Google Maps.