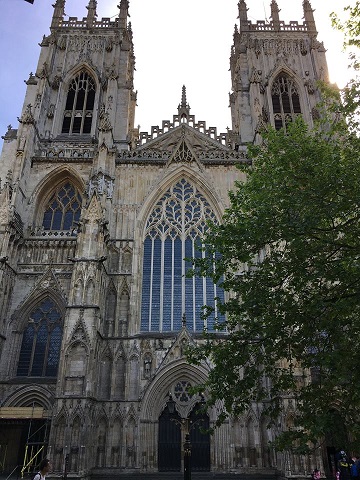 I was recently in Huddersfield, England, in the region of Yorkshire, for a conference and decided to take the opportunity to travel on England’s excellent rail system and go “up the road” to York. Besides walking around the historic city, I wanted to visit three Stainforth books held by the York Minster Library, on the grounds of York Minster Cathedral. All three books were given to York Minster as part of a donation by Edward Hailstone (1818-1890) upon his death, and I was hoping to discover more about Hailstone, the books, and anything else I could discover about their coming to York Minster. While actual information about Hailstone was scarce, it was a fruitful visit nonetheless.

The three books at York Minster are: A Selection of Hymns, Designed Principally for the Use of Prisoners by Ann Alexander, The Northern Heiress by Mary Davys, and Sentimental Poetry, Acrostics, &c. by Isabella Espener (you can view a list of the books with links to records here). These are all small, slim volumes, and I was struck by just how little they were! I was able to look completely through every page of every book in less than an hour, checking for any annotations that Stainforth might have written in. Sadly, there were none. However, the visit and seeing Hailstone’s bookplates was illuminating, especially as to how his bookplate design speaks to his collecting interest.

Edward Hailstone was born in Bradford, England, and lived there for most of his life, and remainrf in the Yorkshire area until his death. His pride and love for Yorkshire was a large part of his life and work, prominently seen in his acquisition of a large library relating to the history and culture of Yorkshire. Indeed, the second sentence of Hailstone’s brief entry in the Oxford Dictionary of National Biography reads, “He devoted himself to collecting books, especially about Yorkshire, but did not neglect local and national responsibilities.”

All three books were sold at the Stainforth auction to a “Wilson,” probably a bookseller and one that Edward Haistone likely had purchased from before as he assembled his library. All three books were also part of single item lots, which I was not expecting given how small the books were. The Alexander and Espener both sold for 1s and the play by Davys sold at gavel for 6s. All three books have a connection to Yorkshire, with both Alexander’s Selection of Hymns and Espener’s Sentimental Poetry published in Yorkshire (in York and Hull respectively) and Davys’ play bearing the subtitle The Humours of York. As far as I can tell Davys never lived in Yorkshire, she was born in Ireland and died in Cambridge, and I sadly cannot find any biographical information on either Ann Alexander or Isabella Espener. Ann Alexander, though, is identified as being “of York” in the library catalog, and given that both books were published in Yorkshire it is also likely that Espener was also from the area.

Of note is that Ann Alexander was a Quaker and her book is listed in the 1863 Descriptive Catalogue of Friends’ Books: Or Books Written by Members of the Society of Friends, Commonly Called Quakers. And while Americans normally think of the Quakers as being associated with Pennsylvania, the movement was started in England and I saw signs for more than one Quaker meeting house while walking around York after I finished my research at the Minster Library. 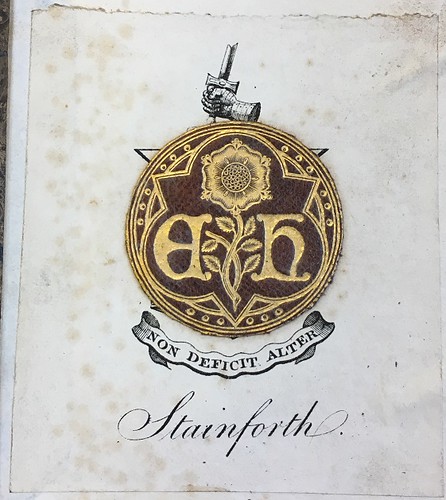 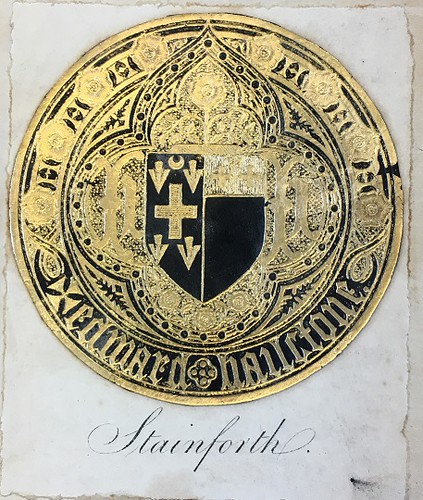 What was most fascinating to me, though, were Hailstone’s bookplates, each one pasted directly over Stainforth’s. Hailstone evidently had two sets of bookplates (see photos), and thankfully the Folger Shakespeare Library already did some legwork confirming this (read their post on the topic here). But what they do not discuss, and is most interesting to me, is the rose motif and its meaning. The Folger post does correctly link the rose on the large book plate to the single rose on the small version, but its meaning seemingly eluded the Folger librarian and would have eluded me as well except for seeing a stray “Yorkshire” banner in my hotel in Huddersfield (see photo). You see, the white rose is a symbol of the House of York and Yorkshire. And yes, white rose as in the War of the Roses. By using the rose symbol in his bookplate, Hailstone was invoking the historical symbol of the House of York, and Yorkshire identity in general, and linking his bookplate directly to his collecting interest. It would be like Stainforth having some nod to female authors on his bookplate instead of his armorial crest of motto of “Non Deficit Alter.”

I must note, however, that there are some differences in the rose symbols between the two bookplates. In both the larger bookplate and the typical Yorkshire white rose, there are five petals. However, in the smaller version of the bookplate, there are six. The larger significance and reasons for this escape me at the moment, and without doing a deeper dive into heraldry I doubt I will be able to resolve this contradiction.

While crowdsourcing Stainforth book locations has been an invaluable source of data and information, there is nothing as exciting as visiting the books in person. I am thankful to the librarians at York Minster for not only submitting the information on the books to the Mapping Project, but also for being friendly and welcoming during my visit. I welcome a chance to travel to Yorkshire again and spend more time exploring the region.

A Negress in Stainforth’s Catalogue