On Wednesday February 19, the Stainforth project team added its newest data feature: dynamic cross-reference links in the “browse” view of the library catalog. The editors on this project include Danna D’Esopo, myself, and Chad Marks.

There are 677 entries in the catalog that tell a user to go “See” another name or a title in another part of the catalog. Most of the cross-references connect an author name or title to another name. Only 12 of them have a target entry that is a title. Each target is encoded in TEI to match the XML ID for each entry, which also matches its page and line number (page.line). For example, we added new encoding to each encoded entry:
L11 Amy of the Peak – See <ref target=”#p43.8″>Bingham</ref>
Here is a screen shot of what the dynamics targets look like in the browsing view – they are the links in blue:

While researching these references to assign a target page and line number for each, we were surprised to learn that assigning target entries to cross-references is an interpretive act. In other words, each time we assigned a page and line number to a “See” entry as its target, we made an editorial decision. This is due to the number of types of cross-references that Stainforth provided as well as what they teach us. The types include:

In addition to learning that assigning targets for cross references is an interpretive act, we also learned that researching them is a great way to find transcription errors. A cross reference forces a user to search for what they believe is a specific target. When the expected target does not appear to exist in the catalog, we searched alternative possible spellings of the referent and often had success. For example, the cross-reference on page 255 line 21 “J6 Lady Ella – See Laedon” should point to “Leeson” instead of “Laedon.”

While researching targets, we also discovered authors and titles we had never heard of. If you follow this link in your research, you learn that The Lady Ella is the story of “Cinderella” in verse, by Jane Eliza Leeson in 1847. I’m teaching a course about the rhetoric of folk tales and their revisions right now, and I recommended this title to a student writing on “Cinderella.” This is also how we discovered Anne B. Poyntz’s 1769 book Je ne sçai quoi, a book that I am obsessed with right now in part because it has a dedication printed in red ink. We gave Poyntz’s title a closer look after we failed to find a target for the entry on page 239 “D10 Je ne sçai quoi by a Lady 1769. See Poyntz”. We failed to find any mention of Poyntz in another part of the catalog. This was one of only three of the 677 cross-references for which we could not uncover a target entry. The other two are:

Can you find a defensible page and line number for their x-reference targets? If you do, email us, and if the editors agree with you we will send you dark chocolate. 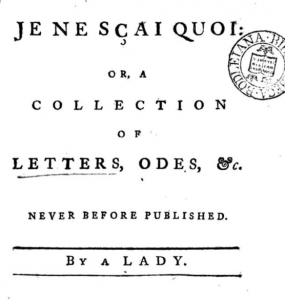 Though the Poyntz x-ref was perhaps unfinished, it also highlights one of many instances where Stainforth used cross-references to disambiguate those who were called “By a Lady” on their title page. In total, the catalog lists 142 titles “By a Lady”. He was very interested in creating a catalog that also served as a guide to pairing writer names and their titles as well as connecting writers’ maiden with married names, initials, as well as pseudonyms that they published under. It reminds me of the work that the Virtual International Authority File does to link titles published by the same person whose names appear differently on title pages.

Here’s an example of Stainforth’s cross-references working like VIAF and, in fact, providing an update to VIAF. Page 17 line 4 “C2 Ayre (Eliza G) Wild Flowers 1842. See Spurgeon” points a reader to page 430 line 12, “[Spurgeon (E.G)] Wild Flowers 1842”. (It’s worth noting that we originally transcribed “Spurgeon” as “Springson” and after studying the cross-reference, we corrected the spelling.) I searched VIAF to discover if Ayre or Spurgeon is the author’s married name to find that VIAF does not have the answer. VIAF only has a sparse entry for “Ayre, Elizabeth Georgiana” from the Australian National Library, and it lists no other names for her or helpful biographical dates. An entry in Yorkshire Notes and Queries (1888) and the title page of her book Evergreens verify that Ayre is the maiden name for Eliza Spurgeon, since Yorkshire Notes calls her “a very young poetess” which implies that she is not yet married when she publishes under that name (144). The catalog also teaches us that at one point, “Wild Flowers” was on Stainforth’s wish list (page 561.16). That is, it was a book that he had trouble getting his hands on, most likely because we now know it was juvenilia and may not have circulated as widely. 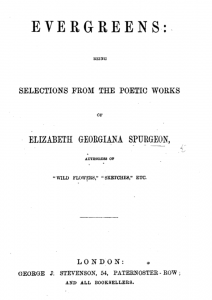 Cross-reference are evidence of Stainforth’s research and desire to share his knowledge-base. The catalog manuscript shows that the Spurgeon reference and its target were later additions to the catalog, for example, on page 17, where “See Spurgeon” is squished into the margin in tiny writing, and on page 430, where the entry for “Wild Flowers” is on a facing “overflow” page added after main entries on page 431. We can glean that Stainforth’s cross-references show evidence of his bibliographical work meant to do more than merely catalog what’s in his library. They provide a key to identifying lesser-known and well-known women writers and connecting them to their titles that
(a) gives writers credit for their work at different stages of their lives, and
(b) teaches scholars and intellectuals consulting the collection about women writers’ identities, and
(c) shows, by the number of such references and the time this must have taken, how the cataloger valued this work.

There is a deep connection to be studied between cross-references added to the catalog, the wish-list, and overflow pages in the acquisitions part of the catalog. I’ll get there, but not today –