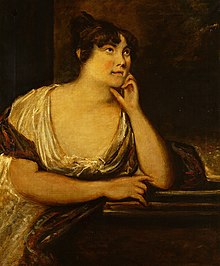 Cobbold [née Knipe; other married name Clarke] was born on 25 February 1764 in London to Elizabeth Burchet and Robert Knipe (c.1731–1801), a merchant and a director of the London Assurance Corporation. At 19 years old, Elizabeth published her first collection of poetry entitled Poems on various subjects (1783). She dedicated her third work, Six Narrative Poems (1787), to Sir Joshua Reynolds, whom she met in a bookstore. At 26, Elizabeth married William Clarke (bap. 1731, d. 1791), a gentleman of 60, who was comptroller of customs at Ipswich. Her new husband died just a few months after their nuptials and she remarried shortly after that, in 1791. Her second husband was John Cobbold (1746–1835), a wealthy Ipswich brewer in his 40s who brought 17 children with him into their marriage.

Despite these tumultuous changes in her life that year, or perhaps because of them, Elizabeth published a 2-volume novel, The Sword, or Father Bertrand’s History of his own Times; from the Original Manuscript (1791) under her married name, Clarke. Elizabeth was extremely industrious in her private life and her writing. She and John Cobbold had 7 more children together over the following ten years, for a total of 21 children in their household. Elizabeth juggled her domestic duties with vibrant participation in Ipswich social, philanthropic, art, and scientific circles. She studied natural history and collected shells, some of which she donated to conchologist and illustrator James Sowerby for inclusion in Mineral Conchology of Great Britain (1823-46). In fact, her assiduous dedication to conchology is a trait she shared with Stainforth. As a tribute to her knowledge, Sowerby named a fossil bivalve shell “Nucula cobboldiae” after Elizabeth. In 1812, she founded “a society for clothing the infant poor” and raised funds to help over 2,000 infants in need.

She and her husband were also theater-goers and local celebrities for hosting the annual Valentine’s Day ball in Ipswich for 20 years running, beginning in 1806. Each year for the ball, Elizabeth wrote eighty love poems on specially cut letter paper for those attendees who were single. She collected the poems in baskets, one for women and another for men, and encouraged unattached guests to draw their poem from the “lottery” in hopes that they would inspire future sweethearts to meet one another at the party. First published privately for only her coterie of friends, these Valentine poems eventually circulated more widely in a published collection in 1814. (See a rare illustrated edition of these poems in this digital edition of Cliff Valentines.) In 1822, Elizabeth’s health declined leaving her too weak to organize her annual Valentine’s party. She died two years later on October 17, 1824. In 1825, Laetitia Jermyn published an edited collection of Cobbold's poetry, prefaced with a memoir of the author and a healthy subscribers list, as a monument to her memory.

Another woman of color