We have for a few weeks now had all of our edited transcription files combined in one master Google Sheet instead of in 509 separate Google Sheets. This has enabled all kinds of editorial work necessary to parse our transcriptions in our database. But it also enables us to do fun things like start to search across Stainforth’s entire library–at the moment, 12,036 rows of data and growing due to his tendency to list multiple editions on a single line–for topics, themes, and keywords in titles. I was interested in seeing how many titles had the term “picturesque” in them. The answer was zero, and I was searching for new texts to use by lesser known authors when I teach the picturesque. So I generalized a bit and started searching just on “nature” — vague as that sounds. In doing so, I stumbled across the entry in the blog title: C9 Potter (Miss) Poetry from Nature [1789] (ms page 367, line 8). Who knows what’s in there? So I turned to the “google” of the Stainforth project: Worldcat.org. Worldcat delivered an Internet Archive edition of this book and identified the author as “Mary Potter,” a woman who, from what I can tell, is fairly unknown or at least difficult to research. 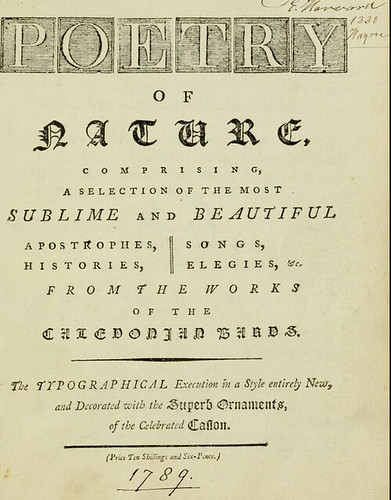 Potter’s only entries in the catalog are for this title, and Stainforth owned two editions: one published in 1789 and the second has no date. She does not have an entry in the Orlando Project, and I have been at pains to quickly find her in other references — but her very common name doesn’t help target search returns. I draw attention to her here because she appears in the catalog solely in the capacity of an editor of a poetry collection and perhaps, I speculate, typesetter. This is the first example of a woman author in Stainforth’s collection that I have found that meets these criteria. Most are poets and playwrights or authors of letters or nonfiction, and we have also found some editors and translators in his collection as well. But Mary Potter is the first potential editor/typesetter I’ve found in the library catalog; my guess is that there are others. The text on the title page is my first clue: Poetry of nature, : comprising, a selection of the most sublime and beautiful apostrophes, histories, songs, elegies, &c. from the works of the Caledonian bards. The typographical execution in a style entirely new, and decorated with the superb ornaments, of the celebrated Caslon. (Price Ten Shillings and Six-Pence.) The title page appears to be equal parts title and subtitle as well as advertisement of the work’s typographical intrigue. The preface, or “preliminary address” tells us more:

The prime intent of the present production is to introduce for public inspection, a species of Typographical Elegance as yet very little (if at all) known; and it was necessary, to chuse the method and matter sufficiently eligible, as well to display the beauties of the performance, as to render it productive of the benevolent purpose it is designed to answer. The Editor reprobates the idea of insinuating a wish, that this Selection may be considered as superseding the Words of the Caledonian Bards, or even comprehending all their beauties excellencies: Her best hopes are only, that the principal Episodes, Addresses, &c. will be more interesting to the Reader, and easier retained in the Memory than when attached to Matter less consequential, and encumbered with a perpetual iteration of the same allusions and images. (i-ii)

Potter makes it clear that her role as an editor covers not just the selections, arrangement, and style of the content, but her editorial control and resources extend to the type and printing of the work, with the latter two being her primary concern. Her use of Caslon, she says, strives to make the songs easier to remember. 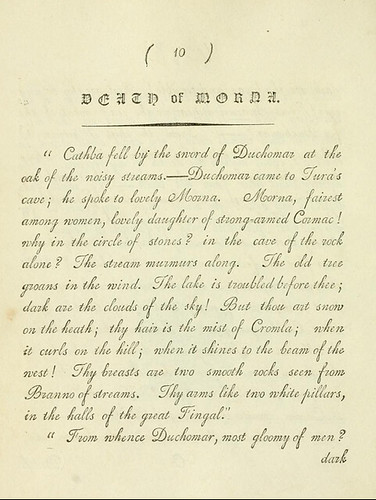 A few more curious details indicate that Potter had a lot of control over contents and the form of this volume. The title page doesn’t mention a publisher or printer. So, did she have a printing press or even a full printing house at her disposal? Her preface mentions that her father was an author with a solid base of subscribers — an asset that this volume boasts, as well — so she is at least an author, and potentially a publisher, of means and reputation, even if they come from outside sources. Finally, the book itself appears from the IA images to be a beautiful object: what I think is a leather cover with gold leaves adorning the spine and marble paper wrappers. What do you think: does Caslon, with its Italic cursive, handwriting appearance, make these songs easier to remember? A follow-up post would delve into the history of Caslon around 1789 to find out what it was or was not being used for at the time. Was the use of this type for this edition, in fact, as new and novel as Potter claims?

Another woman of color

MLA 2016 recap: Storified tweets from “Bibliography in the Digital Age”