Our first count of the editions, volumes, and people mentioned in Stainforth’s library catalog yielded 7,726 editions (8,804 volumes) by 3,721 authors/editors/translators/etc, and this count was largely performed by Cayla Eagon, who was a PhD student at CU-Boulder at the time and a stellar editor – we miss having her on the team. Our first count was performed in 2014. In the five years since our initial count, we have refined our data tremendously. Since one of the defining features of the library is how large it was, it’s important to be able to speak about its size as accurately as we can. I tasked the complicated work of “the revised count” to our current indomitable RA editor, Danna D’Esopo (SCU), who is as detail-oriented as editors come. What will the numbers be this time? We’ll find out soon! In the meantime, I thought it was important to document how complex this question is that sounds so simple: how big was Stainforth’s library? It’s a window into how every step of this project is more complex than it seems and requires disciplinary expertise in book history, library history, women’s writing, and/or literary history, as well as digital expertise to automate as much of the work as possible (but never all of it – that’s not possible), and several editors to help the process of puzzling through questions and challenges along the way, usually in our Slack feed.

How do you quantify what’s in a library that has a variable library catalog that’s been parsed into a database and then edited? What units do you count as the measure? Based on the data that Stainforth provides in his library catalog, the most accurate units to count are editions because he mostly structured his catalog as an editions list. He sometimes records how many volumes comprise a certain edition, but we have no way of knowing if he did this consistently. (Our first count assumed that each edition for which he did not give a volume count was a single volume, and we then added the additional volumes he lists on top of that. But I’ve grown doubtful of his consistency in listing volume numbers.)

Because the library catalog has two sections, we are breaking the editions count into two parts as well: editions mentioned in the Acquisitions or holdings section of the catalog (up to page 510) and editions mentioned in the Wants section, or wish list (pages 510 – 746). The reason we are counting the Wants section is because he lists there all the books he wants to acquire and then as he gains them, he crosses them off and usually adds them to the Acquisitions list; if he does not cross them off with a single strikethrough, we often do not find a corresponding entry for them in his holdings list and we presume that he did not acquire the book. Counting the editions mentioned in the Wants list will tell us how many editions Stainforth was at first unable to get hold of (in circulation but hard to find), how many he acquired (have a single strikethrough), and how many he was ultimately unable to procure. These numbers are important to show that his library was an evolving project; he did not manage to collect all of women’s poetry, drama, and nonfiction because women’s authorial productivity exceeded his ability to collect it all. His collection is synecdochal of women’s book history and points to all that he was unable to obtain and even what he was unable to catalog. The uncataloged speak volumes.

To help Danna with the revised count(s), I automated as much of it as possible, so that for each count there is an automated pre-count and then human editorial adjustments that refine the early figure. I ran a query from our SQL database that gave her a spreadsheet listing Title ID, Title, publication years per title entry (this is often how Stainforth denotes diff editions), auto-sum of number of pub years mentioned in previous column, and then page number, line number, and transcribed title so she could easily look up the entry in the catalog. The spreadsheet separated the acquisitions list and Wants list into pages, since those are different counts. Danna then went through each list looking for unique cases to consider, such as duplicates to eliminate, the 677 cross-references Stainforth provides, entries with marginalia that are not clearly identifiable as editions (we researched these), and entries with various kinds of strikethroughs and cross-outs. We discuss these on Slack and make decisions about what constitutes an edition — not as easy as it sounds! 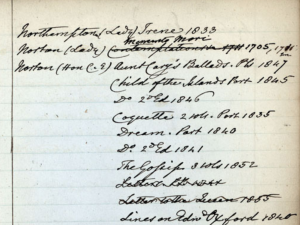 “Contemplations” is short for Contemplations Moral and Divine, a title by Matthew Hale, yet in Worldcat we see there is an edition of this title that includes “Meditations on Death” by Lady Norton in the back of the book (Stainforth makes a point of not excluding works by women bound with works by men — the collection/binding doesn’t matter to him). “Memento Mori” is written above the struck-through title, which I interpret to mean he has “Contemplations,” or a book associated with it, but is calling it by a different name. Two strikes through 1711 signifies a deletion to us. We interpret the wavy lines that go thoroughly through Norton (Hon C. E)’s “Letter” entries (a few lines below) as deletions.

[I use the verbs “interpret” and “signify” intentionally to convey that, of course, we don’t absolutely know what Stainforth thought or intended his marks to mean. We’ve been interpreting his library project through his catalog since 2012. We welcome alternative readings and are always happy to fix clear errors.]

After we make editorial decisions together on how to count the particularly tricky cases, we’ll have editions counts for the Acquisitions list and the Wants list. Next, we’ll consider how to tackle a count of the people mentioned in the library and, frankly, if that’s a smart use of our time at this point with so many other tasks required to prepare our data for peer review with 18thConnect. We have been, for years now, chipping away at creating person records for each person represented in the library (as is easy to see, Stainforth occasionally records the same person under different names and even slightly different transcriptions). We have been working our way from the easy-to-find people like Hannah More to the very rare authors who have not been published on or cataloged by major international libraries. We are about 1/3 of the way down the list of all names mentioned in the catalog, and the entries are already quite rare and difficult to research. (I both celebrate and lament being [only?] one-third of the way through this very long person-record project.) It’s possible that the task of a detailed person count may have to wait until we are further along in our person-record creation process. We may continue approximating the person count for the time being.