One longstanding set of questions that Stainforth editors have been unable to answer (among many such questions) relates to the origins of Francis Stainforth’s collecting project. When did he begin collecting books, and why? And relatedly, when did he begin cataloging his library in the manuscript catalog that is the fount of what we know about his library project today?

These are really hard questions to answer, and it’s important to say off the bat that despite all the research on his library that the team has conducted over the years, we don’t have great answers. However, there is a lot to learn from writing about why these are hard questions to answer. Frankly, writing this blog post has (re)kindled my desire to solve these puzzles that had been set aside for so long while we edited his catalog.

When did Stainforth start collecting books?

First, we must acknowledge that we have not found any documentary evidence written by Stainforth or by someone else that tells us about when he started his library project or why he undertook this endeavor. Our understanding of the library’s timeline must be gleaned from what evidence we have gathered from his biography, from the archival materials that bear his mark, and from the manuscript catalog in which he kept the record of his library project.

It is reasonable to assume that Stainforth did not start collecting books until after his return from India in 1827, where he served as Captain of the 1st Light Cavalry in the Bengal Army. We learn from Susan Guinn-Chipman’s biography that following his return to England, he dove into his religious studies to earn a B.A. and an M.A. from the University of Cambridge, while simultaneously serving as a curate at Longstow, a village west of Cambridge. In 1841, he moved to Surrey, where he was a curate of Camden Chapel until 1846. Then, he transferred to St. Pancras in London in 1846, where he stayed until 1852. In 1852, he transferred again and became Perpetual Curate of All Hallow’s Staining, located in southeast London, and remained in that position until his death in 1866. The collection of books that constituted his library, that was auctioned by Sotheby, Wilkinson, and Hodge after his death, was last held in his All Hallow’s Staining residence, where he lived for 14 years with his second wife, Elizabeth. From his biography, we learn that a number of people lived with Francis and Elizabeth in their All Hallow’s home: “The 1861 census records Julia [Stainforth], who was then 34, residing with her father Francis, her stepmother Elizabeth Ruthven Stainforth, her half-brother Francis Edward, then 21, a cook, and two maids, in the rectory of All Hallows Staining at 9 Mark Lane, London.” 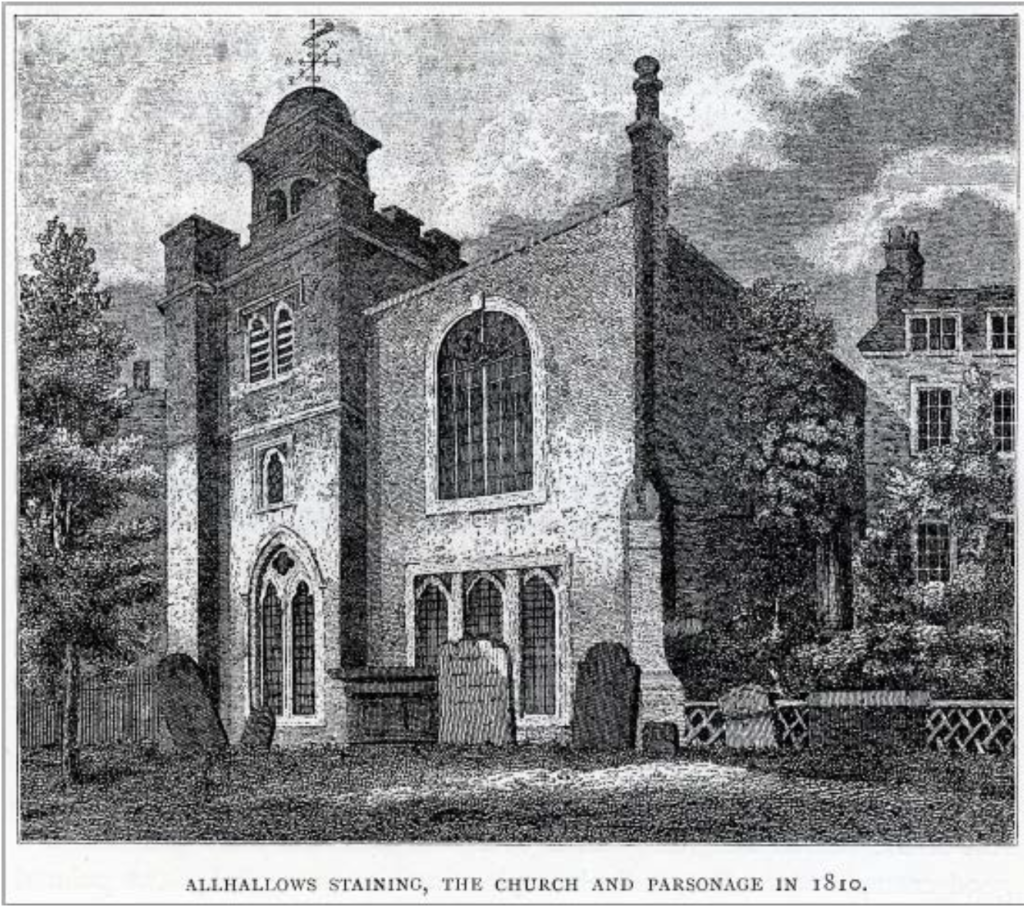 Given the size of Stainforth’s library when he died, it is reasonable to assume that he did not move nearly 8,000 volumes with him from Cambridge, to Surrey, to St. Pancras (London), and then to All Hallow’s Staining (London). But maybe he did? (I personally hauled an enormous collection of books with me between jobs, but not 8,000 volumes.) Perhaps he started his collection after he finished his studies and took his first post in Surrey at Camden Chapel in 1841, and moved his gradually growing collection with him two more times. It is also equally possible that he built his library of women’s writing entirely during the 14 years he lived at All Hallow’s Staining. “His library at All Hallows Staining probably rested within the walls of the rectory, situated just to the south, adjacent to the nave of the church” (Guinn-Chipman). This timing theory is supported by evidence of his other collecting habits during this period. For example, Stainforth hosted some of the earliest meetings of serious stamp collectors in London in his rectory at All Hallow’s Staining from 1861-1866. These meetings in the early 1860s were the basis for the founding of the Royal Philatelic Society of London. According to the “Reminiscences” of M. P. Castle in The London Philatelist of 1893, Stainforth was

cultured in his pursuits and ideas, ‘most kind and fatherly and of an engaging manner,’ such was the venerable person under whose kindly auspices the first tiny philatelic seedling was planted in this country. As Mr. Philbrick says, ‘The first idea of the Society no doubt took its origin from our custom to meet on Saturday afternoons at the Rev. F. J. Stainforth’s home in Mark Lane. Mount Brown made his catalogue there and Mr. Stainforth and I did the second edition by his (Mr. S.’s) collection.'”

Why is dating the catalog manuscript hard?

Dating the creation of Stainforth’s library catalog is also a tough task. Unlike the auction catalog, it is not a publication with an imprint. That would be too easy, right? Stainforth wrote out his library catalog by hand in a large blank account book. The manuscript measures 23 cm. high, 18.5 cm wide, 5.5 cm deep. The cover is made of roan-backed (sheepskin) boards that have been re-backed, according to the dealer’s description. Some of the edges of the book have been chipped. The dealer describes the book as a “thick quarto account book of 373 leaves, of which 254 leaves comprise the catalogue and 92 leaves comprise Stainforth’s wants lists.” The account book is ruled with 24 lines per page and 2 columns on each page. The left column is narrow and the top row is deeper than the rest. It is written in tête-bêche (head-to-toe) format such that the “Wants” section that begins on p.507 is inverted, and what appears to be the back cover is the front cover for the “Wants” list. (See our physical description page for more detail, flip through the manuscript in images here.)

The account book contains a plate pasted on marbled endpapers that reads: “H. Gosbell, Stationer, Account Book Manufacturer, 116 High Holborn, Corner of Kingsgate Street. Engraving, Printing, and Bookbinding.” Gosbell is listed as a stationer in an 1838-1840 directory of businesses: John Tallis’s London Street Views, London Shops and Business , as well as an 1842 directory of businesses and later directories in the 1840s. This suggests that the stationer would have been in business in 1846 when Stainforth arrived in London to take his position at St. Pancras, and he may have purchased the account book from Gosbell then, or later, to begin documenting his library.

However, the genesis of the catalog and of the library must be considered as independent events. Who’s to say that Stainforth began cataloging his library precisely as he began collecting books? We would need a record of his acquisitions as well as the dates that he recorded those acquisitions in his catalog, and there is no clear record of those dates that we have found to date.

However, we do have some evidence of acquisition dates and order. First, we can work backward from the known year of his death: 1866. A search in our database yields 33 titles with publication dates of 1866, and because Stainforth died this year, we know he procured these books and listed them in his catalog this year and no later. Earlier than this, however, things get tricky to date, because the publication year does not necessarily equate to the acquisition year or the year he recorded the title in his catalog.

Unless It’s 1866, Publication Date May Not = Acquisition Year May Not = Date Recorded in Catalog

We know that Stainforth corresponded with some of the authors whose works he collected, as he saved their correspondence in a scrapbook held in the British Library. For example, he kept a letter sent to him from Jane Simpson, dated March 16, 1863, that states “I should like exceedingly to see your collection of female authors & must think that while the lady writers are greatly indebted to you for having made it, the lady readers should be equally interested to know of its existence.” This tells us that in 1863, Stainforth had a substantial collection of women’s writing already, and he told people about it at least in part to solicit their contributions, as he did Simpson’s poetry. The letters I have found from authors to Stainforth, that Stainforth collected in his scrapbook and elsewhere, are dated in the 1860s. This is exciting, but I still wonder about the earlier life of the library.

Very early in the project, we had hoped the shelfmarks would provide some key to the organization of his collection or, perhaps, the order of acquisition. We have yet to make progress discovering rhyme or reason of the shelfmarks. If you have ideas, please let us know — we will send you dark chocolate, worship you, and cite you generously!

One can, to a certain extent, use the relationship between the Wants section and the Acquisitions section, and the organization of the Acquisitions verso and recto pages of the catalog to determine the order in which books were acquired in relation to one another. However, dates of acquisition are still very hard to figure out, though of course we can assume that a work could not have been acquired before its publication date, of course.

Generally speaking, in the Acquisitions section, the recto contains an earlier list that often fills to the bottom of the page, and the verso becomes an overflow page. Titles are listed on the verso horizontally proximate to their alphabetical listing on the recto, and those on the verso are thought to be procured later than those on the recto (hence the use of the overflow page to catalog them). Here is an example spread (pgs 34 and 35): 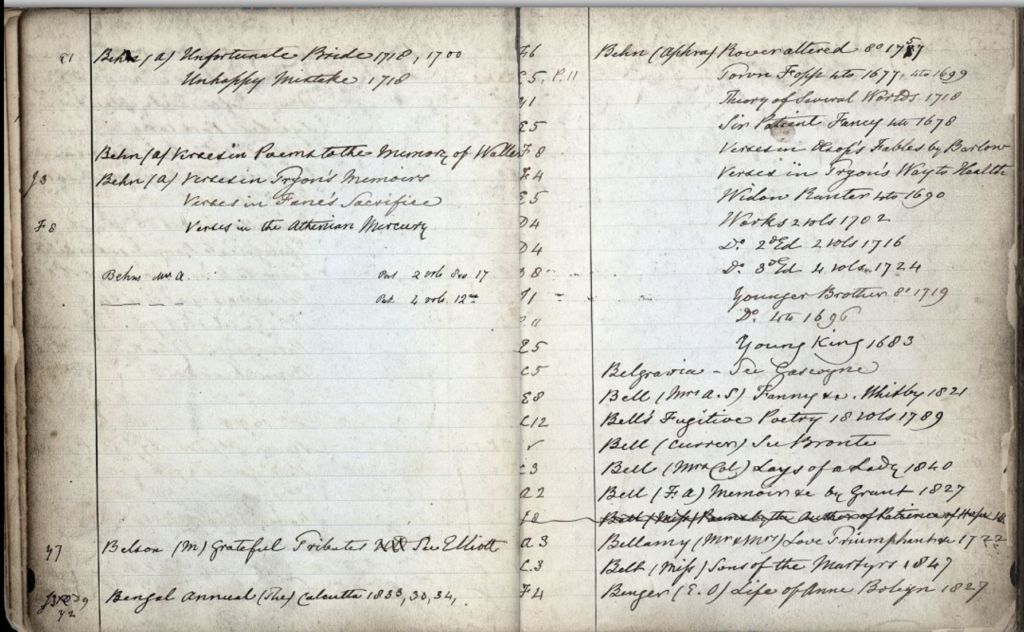 Aphra Behn’s Unfortunate Bride (1718, 1700) is an example of a title that we think Stainforth likely acquired, or at the very least cataloged, after he listed the other books by Behn and Belt, Bellamy, Benger, and the other B authors listed on page 35.

In the next example, I’ll demonstrate how you can use the Wants list to argue for an order of acquisition. Alice Flowerdew’s Poems 2nd ed. is listed in the Wants section of the catalog, on page 530. It has a strikethrough, which implies that Stainforth managed to find and acquire that book. You can see that he did, on line 20 of page 161. 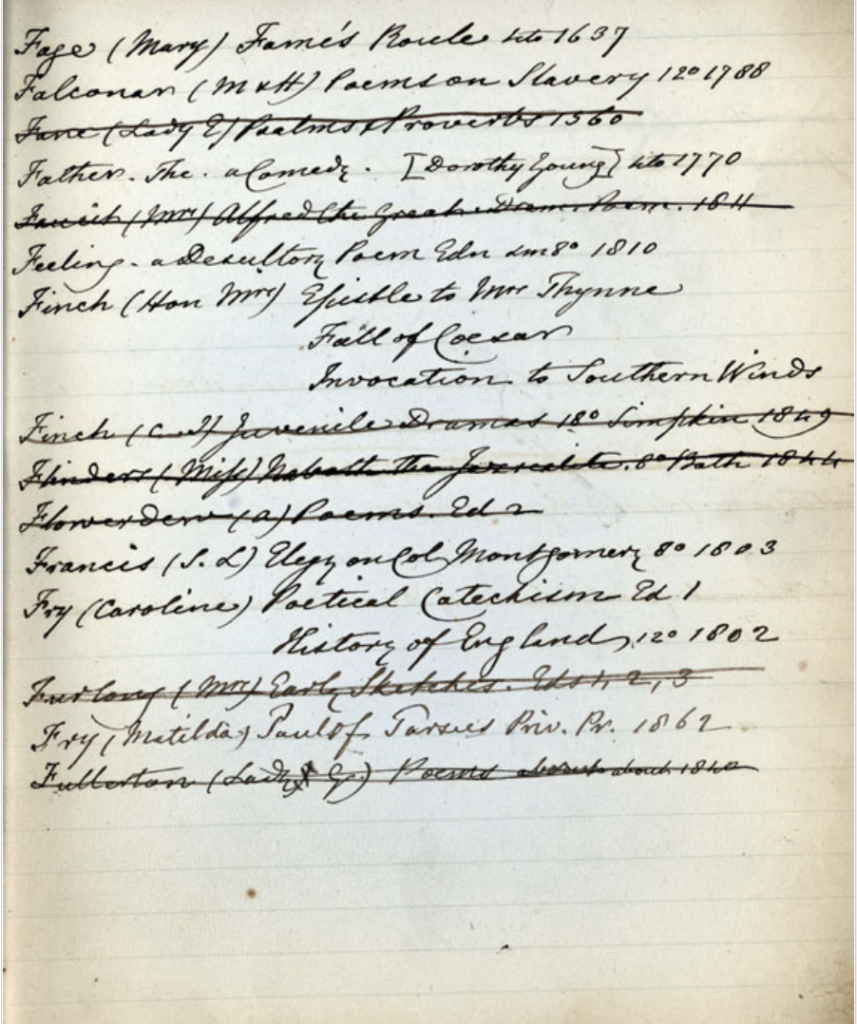 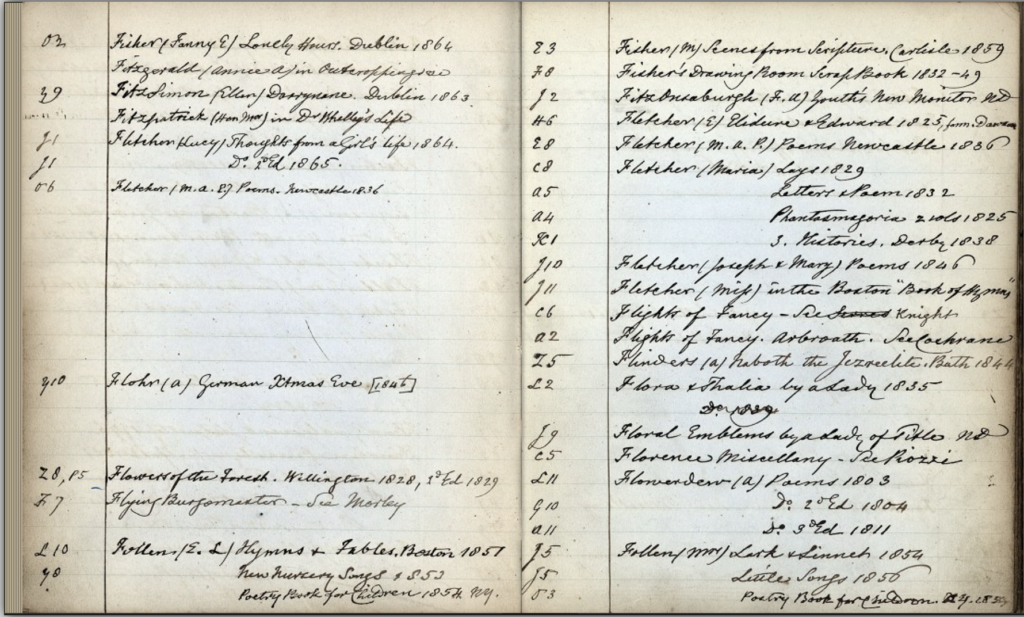 This suggests that the other titles by Flowerdew on page 161 (the 1803 and 1811 editions) were potentially acquired and cataloged before the 2nd edition, which to me, appears to be in a slightly browner ink than the entries around it. It also suggests that the titles listed on the verso were acquired later–they belong in this alphabetic list but the recto was already full when they needed to be cataloged at a later date.

One idea that I have had, but have no hard evidence to prove, is that Stainforth began this catalog once he had a fairly substantial library already collected, but he knew he was still actively collecting and seeking titles he could not find. This would explain why the recto pages appear so regular, in form and penmanship, and the verso or overflow pages are less regular. He (perhaps) knew his collection was so large that he sought a very deep account book to track both what he had already found and shelved in his home, as well as what he knew he was looking for (the wish list). It is also possible that there are earlier, smaller catalogs that he kept as his library grew, but I have yet to find anything like this.

Without hard documentary evidence, we must continue to recognize that time of cataloging does not necessarily correspond with time of acquisition or publication date — we’re just making educated guesses based on patterns we have noticed by studying the catalog. We welcome feedback and ideas for discovering Stainforth’s earliest acquisitions in the catalog and theories about when he created his manuscript.

Special thanks to Greg Robl at Norlin Library for the photographs of the manuscript catalog taken specifically for this blog post.