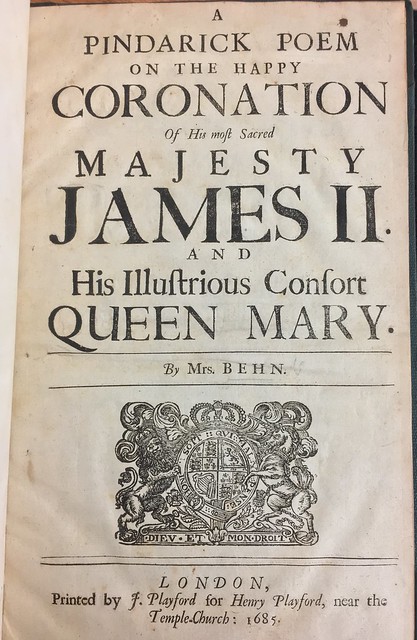 forth Mapping Project might have its goal of tracking down the current location of his former library books, but we are also interested in how those books got to where they are now. To do this we have to work the trail from both ends: where they went after the auction in 1867 while also backtracking from where they are now. This work will not always be easy, and there are sure to be gaps in the journey that we are unable to trace. However, even having a partial map of a book’s travels will help illuminate aspects of the book trade, libraries, and collectors that dispersed the contents of Stainforth’s library.

To demonstrate how this process works, and the tools that Team Stainforth will be using to complete this task, I would like to tell you the story of one book: Aphra Behn’s “A pindarick poem on the happy coronation of His Most Sacred Majesty James II, and his illustrious consort Queen Mary” which is held in the University of Colorado Boulder’s Special Collections and Archives department.

This book was purchased by CU in late 2005 from British book dealer C.R. Johnson Rare Book Collections, a firm founded in the 1970s. Sadly, the book has no other identifying marks, inscriptions, or notes that give any trace of its journey save for the Stainforth bookplate.

Thanks to Team Leader Kirstyn Leuner’s trip to the British Library in the summer of 2015, though, we now have another tool in our book hunting arsenal: photographs of the entire auction catalog with buyer information. This source gives us two additional pieces of information about Lot 229, aka “Pindarick Poem:” how much it sold for and to whom. In this case it sold for four shillings to someone named “Arthur.”

Arthur is a name that occurs frequently among the buyers at the Stainforth auction, which means that he was likely either a bookseller buying up stock or a buyer for someone else—such as our known buyers Thomas and William Boone who were the purchasing agents for the British Museum (now Library). Using this assumption, and some Google searching, we believe that “Arthur” is the London bookseller Thomas Arthur, who was active in the book trade from the 1850s to 1870s, according to sources at

the University of Glasgow and the

Oxford Bodleian Library. This time frame fits perfectly with the 1867 Sotheby’s Stainforth auction, and there is even a note in one of the Glasgow references that mentions Arthur purchasing an item at a Sotheby’s auction in 1870.

So we know that CU acquired the book in 2005, and that Thomas Arthur purchased it in 1867, but what happened in the intervening 138 years? When traditional sources have been exhausted, then sometimes a simple Google search can yield results. And in this case it did as CU’s copy of Aphra Behn’s “A pindarick poem on the happy coronation” seems to have passed through Sotheby’s auction house at least twice.

On May 27, 2004, the Stainforth copy of Behn’s poem was auctioned off as part of the library of John R.B. Brett-Smith, a collector of 17th and 18th century English literature and formerly the president of the US branch of Oxford University Press. When and where Brett-Smith acquired the book is unknown, though the Sotheby’s description of his library does state that, “Women writers constitute a sizeable portion of the library, with first or rare editions of works by figures such as Aphra Behn and Katherine Philips, as well as books owned by women of that period.” So while Brett-Smith might not have had Stainforth’s focus on women’s writing, it does seem to have been something he did not shy away from. The Behn was also not the only Stainforth book that was in Brett-Smith’s library and auctioned by Sotheby’s during the sale. It is interesting to note that this second Stainforth book, which contains a poem by Aphra Behn, was Lot 255 in the 1867 auction and was also purchased by Thomas Arthur, who bought nineteen Behn books in that auction.

Given the proximity of this 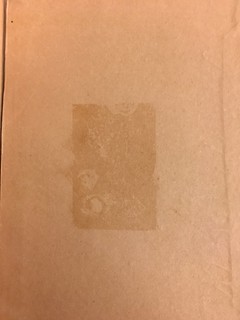 second auction in 2004 to CU’s purchase in 2005, it is likely that the buyer at the Sotheby’s auction was C.R. Johnson Rare Books who then sold it to CU. Unfortunately, without knowing more about Thomas Arthur and where and when John R.B. Brett-Smith purchased CU’s Behn book, this is where the trail runs cold. But I am hopeful that by tracking down some of Arthur’s book catalogs, or those of William Ridler who took over Arthur’s business (presumably in the 1870s), we will be able to get an idea of when he sold the book. This would also be coupled with finding more information about Brett-Smith and his library. For now, though, we have only these five points along the trail: Frances John Stainforth, Thomas Arthur, John R.B. Brett-Smith, C.R. Johnson Rare Book Collections, and the University of Colorado Boulder. Or put another way, two book collectors, two booksellers, and a library.

One final mystery of CU’s copy of Behn’s poem remains, though. Inside the back cover there seems to be the glue residue of a bookplate. It is a compelling mystery as to just who this former owner might be. Could it have been from Brett-Smith? Maybe another previous owner who had the book before or after Stainforth? Questions still remain.

The Stainforth manuscript by the numbers

The Women Authors of Stainforth’s Library: Introducing a Series of Blog Posts, Teasers